The past week was not great for dedicated Bitcoin maximalists, as the largest cryptocurrency on the market noted a sudden and significant drop in price. However, this time the altcoin market didn’t follow in Bitcoin’s tracks, and many alternative cryptocurrencies managed to achieve impressive gains even though the BTC price was falling down. Let’s take a look at some of the most interesting developments that happened on the altcoin market over the past week:

Solana (SOL) is quickly becoming one of the most serious competitors to Ethereum. The SOL price has appreciated by 75% in a week and reached a new all-time high of almost $215.

According to the experts, the main reason for the rapid pace at which the Solana price has been rising over the past few weeks is the constant popularity of Non-Fungible Tokens. Numerous new NFT projects launching on the Solana network are generating tremendous interest of crypto enthusiasts and a massive inflow of funds to the SOL blockchain. 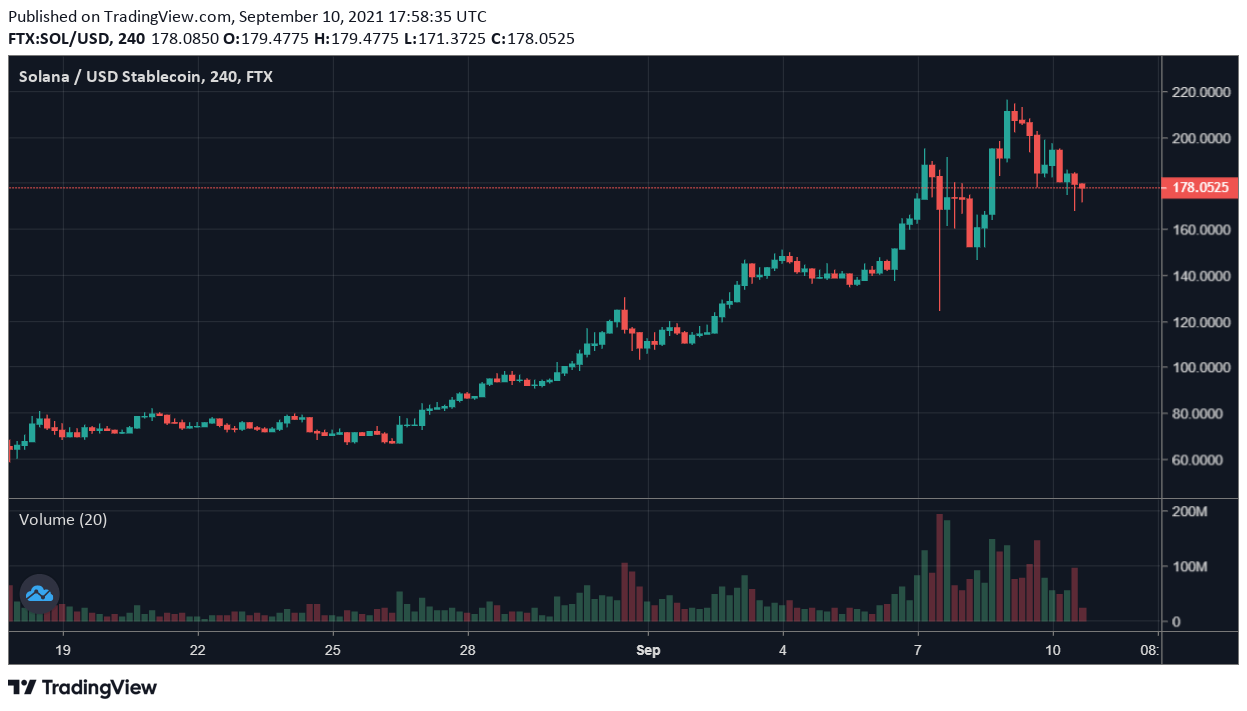 Becoming the third largest cryptocurrency on the market was certainly a milestone in the development of Cardano (ADA), and there’s no doubt that ADA can be considered one of the most profitable crypto assets of 2021. However, it seems like the Cardano bull rally might finally be coming to an end, as the ADA price has sharply declined by 17.5% over the past week.

The problems of Cardano are linked to the underwhelming launch of the Alonzo update to the ADA blockchain, which was hyped as a groundbreaking upgrade supposed to turn Cardano into a next-generation smart contracts platform that would become a true Ethereum-killer. In reality, the Alonzo update seems to be troubled with significant issues, and the users of the first ADA-based decentralized exchange called Minswap are reporting numerous problems.

Although Cardano is still the third largest cryptocurrency on the market, the situation might soon change. If the technical issues with the smart contracts functionality of ADA are not fixed soon, coins like BNB and SOL might soon replace ADA in market capitalization.

Stablecoins Prove They Are Truly Stable as the BTC Price Falls

When the Bitcoin price sharply declined by over $5,000 in a short time, numerous investors rallied their funds to the exchanges - some to sell their BTC to cut losses, and some to buy the dip by acquiring more bitcoins. Naturally, this sudden turmoil on the market has caused a massive spike in the volume of stablecoins, which are now the most common medium with which the investors buy and sell Bitcoin.

According to on-chain data analysis, the average daily stablecoin volumes increased by 75%-100% shortly after the Bitcoin price drop. But the most important information is that stablecoins proved their usefulness by remaining stable, and not deviating from the dollar peg even during rampant price action and sudden growth in volume.

Fetch.ai (FET) is still a relatively less known token, but the current FET price action shows that it might soon become a very popular crypto asset. Despite the fact that the prices of Bitcoin and other major assets were falling down, Fetch.ai was able to appreciate by over 42% in just 7 days.

Fetch.ai is a project that claims to combine blockchain-based solutions such as smart contracts with artificial intelligence and machine learning. But while many crypto projects in the past used AI as a marketing buzzword, Fetch.ai might be the first one to actually have used a combination of artificial intelligence and blockchain in a useful way.

On September 7th, a Fetch.ai algorithm on board of a Tesla vehicle was used to autonomously identify the car while entering gated communities and parking. If the technology developed by Fetch.ai becomes mainstream in self-driving cars, the recent price rise of FET might be just the beginning of a massive rally.